Making Your Case for VMworld 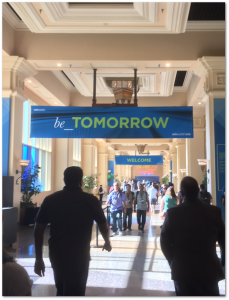 VMworld 2016 was last week.  It was my first time attending.  I worked in a VMware booth in the Solutions Exchange.  I had never been able to go when I was on the customer side.  That fact was not lost on me during the week.  As I flew home, I wrote down some thoughts about the week.  It was a new experience for me.  There was a fair amount of hard work, a good bit of fun; but most importantly I was able to observe interactions and discussions between people. That was by far the most interesting and important part.

About mid way through the week, I was able to meet up with one of my customers that had attended.  I am relatively new to the account so I had not had a lot of face time with them yet.  It was good to get a chance to talk with them outside of their workplace.  During our conversation, it came out that they had recently begun looking to leverage vSAN as a way to increase their High Availability potential.

Utilizing a stretched vSAN cluster, they could extend their High Availability capabilities outside of a single building.  Their manager was not quite yet sold on the idea.  He was hoping to validate this use case for the technology and was wary of being the first to try something new.  I introduced them to a vSAN subject matter expert who was also at VMworld.   As I watched the conversation, the SME started to draw a diagram on a whiteboard, and suddenly exclaimed – “I know 2 people at VMworld who are already doing this in production.  Can I introduce them to you?“.  He grabbed his phone and sent a text message.  A few minutes later another small group showed up.  Introductions were made and then the conversation began – heads began nodding and light bulbs were going off.

Later that evening, I received a text from my customer thanking me for connecting them.  They had a very valuable conversation that day.  Not only had they received some real world validation of their ideas – their universe had just expanded a little bit.  The team they had been introduced to worked less than an hour away from their main campus.

On Thursday, I was able to wander around a bit.  My booth duties had been completed,  and there were still a few breakout sessions and hands-on labs available.  I sat down at a lunch table to get something to eat and browse the schedule.   Another person was already at the table; but was on the phone.  A few minutes later, his call ended and we introduced ourselves.  He works for a mid-sized business, and had recently taken on responsibilities for their virtual infrastructure.  This put him in a position where he had to learn on his own.  After working at it for a while he achieved his VCP certification.  There were some areas he still wanted to grow in – hence his trip to VMworld.

On his flight out, he was making small talk with the person sitting next to him.  It was at this point he learned the person sitting next to him was a Technical Marketing Manager for one of the Storage & Availability products.  They pointed him to the vBrownBag podcast (and gave him a sticker to help him remember).  They even suggested one or two sessions for him to attend as a way to grow his knowledge.  My lunch companion was very impressed at the approachability and accesibility of VMware’s resources. It made a very powerful impression on him.

This echoes my own experiences as a new VMware employee.  I was amazed at the employees who stopped at my booth during my shifts. Product Managers and developers would stop by after a breakout session to hear the questions people had.  They would often jump in and help answer questions or add technical depth.  It was amazing to see the discussions that occurred.

How to make your case for VMworld

I hope this helps you knock down a few bricks in your own wall.  How do you convince your boss you need to go?  Sound off in the comments…