Recently I started working with a new customer who is migrating to VMware Horizon View.  It has been a while since I have done much with Horizon so I thought setting it up in my lab would help me get up to speed.

I decided to install Horizon 7.12, setup a few desktop pools and learn about Instant Clones with an eye to upgrading to Horizon 8 (aka Horizon 2006 as it prefers to be known) in the near future.  I had been using Windows Server 2012 in my lab as those were the latest licenses I was able to get from my Microsoft Technet subscription before they ended that program.  Horizon 2006 does not support Windows Server 2012 so I had to make an early choice.  Do I run 2012 now, and upgrade it later or jump to a newer version now?

Lab Headaches can turn into knowledge

I decided to try Windows 2016 Server Core for my connection server.  I have always been pretty comfortable at command line; and wanted to try out Windows Server Core.  I have to admit it was a bit “different”  not have any of the familiar  GUI interfaces.    Some of the smallest things (ahem configuring network stack) took me a bit and forced me to learn something new.  This is a good thing – and why it is a good idea to get in the lab often.

The install of the Horizon Connection Server in my lab was pretty easy.  Run the Connection server installer, and a few clicks later, I was looking at the login prompt to the Horizon Admin Console.    That’s when I hit my first error: 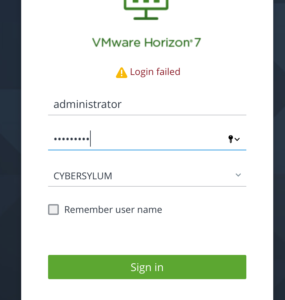 I re-tried the password once or twice; but no luck.  I thought back through the install – one of the prompts was to name an Active Directory group which will have access rights to the Horizon View Admin console.    Had I mistyped it?   I couldn’t remember or find where to look it up, so I deleted the VM, re-cloned it and tried again.   I received the same error.  Perhaps it was something with the group I had created, so I started from scratch a third time and left the default in place (naming the Domain Admin as the user having rights).  This time – the third time wasn’t a charm.

So I decided to re-group.

I double checked the Horizon 7.12 documentation and version release notes.  Windows Server 2016 is supported for the Connection Server, and Horizon did support the Active Directory Functional Level provided by my DCs (which is at Windows 2012).

I did a pretty generic search for “Horizon 7 login failed”, and stumbled across VMware KB 2144768.

On the new horizon HTML5 console, 7.9 and later you may hit the following symptom also.

I wasn’t using Chrome (Firefox at first and Safari after that). Earlier in my testing,  I had also tried the original Flash-based console.  I did get the behavior described; but assumed it was either a performance issue in my lab environment – or an issue with my patience in waiting for the services to start after a reboot.

Since I was using Server Core, I was hitting the console from my laptop and wasn’t using the localhost link that you normally would after installing the software.  I wasn’t sure this would fix it; but was enough to try…

The fix was to create a file with a single boolean flag.  I created the file with notepad: 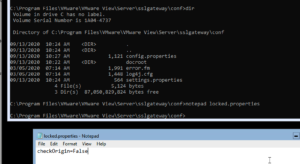 I restarted the services and voila!  I can now login to the Horizon Admin Console!